Datacomm Cables (Cables.com) provides a comprehensive catalog of Fiber Optic Cables (sometimes spelled "fibre optic") and related products. Among our complete line is a wide variety of ready-made Fiber Optic Patch, and we can also custom make them for any application and installation in professional and home environments

When it comes to connectivity, we've got you covered. Check our selection of HDMI cables or VGA to HDMI conversion equipment for an outstanding home theater experience. If you need to set up your home office or a CCTV network, you can find all the accessories you need right here. Browse Cables.com to find the solutions you are looking for at just the right price.

Our outdoor ethernet cables are shielded to protect from weather. Whether it is a Small or large outdoor cabling project, we have your cables. 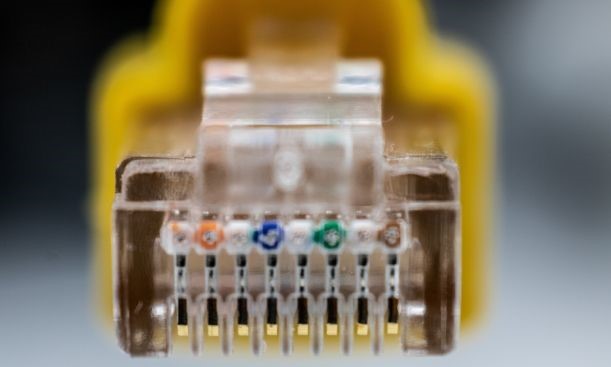 Even wireless networks require different types of cables to connect devices to each other. Learn the difference between LAN cable and crossover cable.

Ethernet cables connect modems to routers and network devices to each other. Different types of cables make networking possible. Depending on your network setup, you’ll have to consider how much ethernet LAN cable vs. ethernet crossover cable you may need to keep your network running smoothly.

Cat6 ethernet cable (sometimes called “patch” cable or “straight-through” cable) connects two different kinds of devices to each other. For example, when you connect a modem or computer to a router. These are ordinary twisted-pair ethernet cables. Each end of this kind of cable uses the same “pinout” wiring scheme. The “pinout” is the order the wires go in the RJ45 connector, the part that a user actually plugs into a port on a device.

There are two types of “pinout” arrangements—these arrangements prescribe the order of the color-coded wires in the eight pins at the termination of the cable. The two configurations recognized by ANSI, TIA, and EIA are the “T-568A” and the “T-568B” configurations. If you look closely at the RJ45 connector, you can check the order of the wires. In T-568A pinout connectors, the order is:

While patch cables connect two different kinds of devices, crossover cable connects two of the same kind of devices—like connecting two computers directly to each other. In crossover cable, the one end of the cable uses the T-568 wiring arrangement and the other end uses T-568B, so the wires literally cross over inside the cable to connect to a pin in a different position on the other side. Crossover cables permit two computers to send and receive signals from each other. If the wiring of the cable didn’t cross over (meaning connect to different pins on one end then the other), each device would be trying to both send and receive signals through the same wire, and nothing would happen. The crossover enables the devices to use different wires to send or receive signals.

Newer versions of switches and routers can detect the type of cable and adjust to it, making it possible to use either patch or crossover cable. Older switches, however, won’t get it. The older switches are static regarding which pins send and which receive, so using the wrong kind of cable will cause the connection to fail.

When you are weighing whether to use regular ethernet LAN cable vs ethernet crossover cable, consider what devices you are connecting and how old those devices are. If you are not sure which type to use, contact your online cable retailer for help.

What Power Cables do you need to mine crypto currency?

What Ethernet Cable is Good for Outdoor Use?

How to Buy the Perfect Outdoor Networking Cables


We collect sales Tax only for orders shipped within NY State.


Can't Find What You Are Looking For?    Build Your Own Custom Cable >>
Easy Product Returns within 30 Days and Secure Shopping for your safety.